Adicts: Joker in the Pack 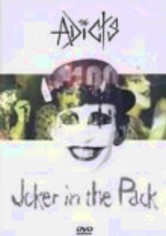 Adicts: Joker in the Pack

2002 NR 0h 41m DVD
Capturing The Adicts in their element, this release contains two live concerts recorded at The Manhattan Club, and at a Blackpool punk all-dayer. The Blackpool concert was filmed in 1982 on a lone VHS video camera, and presents the band exactly how they're supposed to sound: live and raw. The Manhattan Club gig dates from 1983 and see's the band in their element bashing out prime punk fare like "How Sad," "Joker in the Pack," "Steamroller" and more.