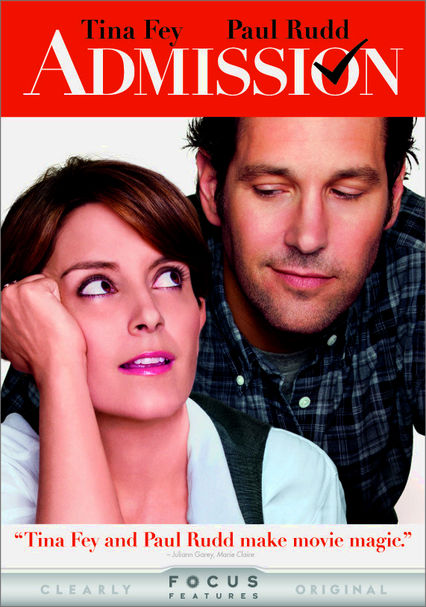 2013 PG-13 1h 47m Blu-ray / DVD
While scouting applicants at an experimental high school, Ivy League admissions officer Portia Nathan discovers that the school's founder is her former college classmate John Halsey -- and that she may have a connection to one of his students.

Parents need to know that Admission, though overall a humorous peek behind the curtain of college admissions, does tread in somewhat serious waters, dealing with a woman's (Tina Fey) past catching up with her (in the form of a son she gave up for adoption) even as she's abandoned by a longtime lover. It's all played for laughs, of course -- as is the seriously stressful business of trying to get into college -- but tweens and teens who aren't involved in the admissions cycle might not appreciate the jokes quite as much. Expect some swearing (mostly "s--t" and "damn"), frank references to sex and drinking (primarily in college, where a teenager is shown attending a party with students who are partaking, though he doesn't drink himself), and sometimes-scathing discussions about high school seniors and their college applications.

Adult characters kiss (the first time, accidentally) and take a shower in separate but adjacent stalls. (All viewers see are their shoulders.) Sexual encounters are implied (a couple is shown kissing/groping/starting to remove clothes before and then buttoning back up after, but not during). Some frank sexual references and humor related to a woman's prosthetic breasts (her character previously had a double mastectomy).

A woman fires a shotgun at a man she thinks may be harassing her daughter. (He's not.) A woman screams at a male character.

Life may seem like a mess, and maybe it is, but sometimes it has to be for you to figure out what you truly want. Also, surprises don't have to destabilize us forever; often, they help us find balance and get on better footing.

Lots of Princeton name-dropping and crest-flashing (and many scenes feature clothing and paraphernalia in Princeton orange). Also plenty of mentions of other schools, including Harvard, and private high schools like Hotchkiss, Deerfield, and Andover. Plus Lipton, VW, and U.S. News & World Report.