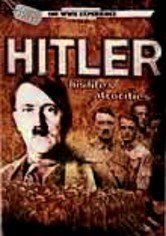 2005 NR 1h 22m DVD
This illuminating documentary traces the personal life and political career of one of history's most notorious leaders -- Adolf Hitler -- chronicling his rise to power and his expansion of Germany's military forces. As the film delves into the shadowy world of the enigmatic figure, viewers are also presented with clues and insights into the life of the madman whose monstrous influence forever changed the world.