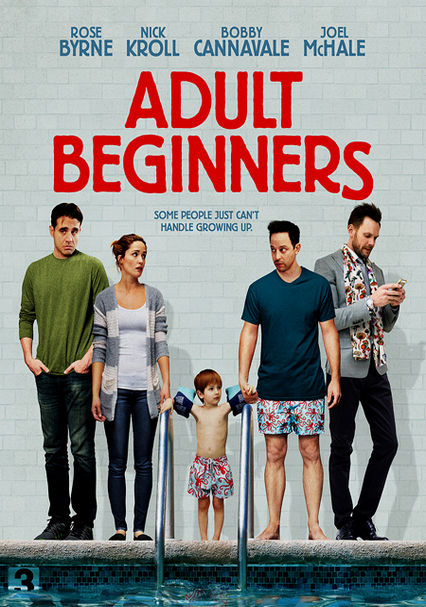 2015 R 1h 32m Blu-ray / DVD
When what was to be a major business coup turns into a financial disaster, penniless entrepreneur Jake decamps from Manhattan and lands on his sister's doorstep in suburbia -- where he ends up as nanny to his 3-year-old nephew.

Parents need to know that Adult Beginners is an indie dramedy that centers on a successful tech entrepreneur who's about to get rich -- but in the process has become a horrible person. Over the course of the story, he loses everything and starts to learn why personal relationships can be worth more than a successful IPO. So he's not exactly a positive role model, but he does grow and learn a few important lessons. Expect a fair bit of drinking (bars, parties, etc.), as well as drug use (both pot and cocaine) and frequent swearing (especially variants of "f--k" and "s--t"), as well as adults having inappropriate conversations in front of children and some kissing/implied sex.

A couple kisses and caresses each other in bed; presumably they're either about to have sex or have just finished. No graphic nudity.

A man talks about a prostitute falling and hitting her head, with bloody results, in front of a young child.

Work, success, and career are important, but sometimes you have to lose them all before you realize that none of it's as important as the people in your life.

Characters use iPhones. Other brands mentioned include Bravo TV (and its shows) and news website TechCrunch. Premise centers on an up-and-coming tech entrepreneur who loses everything after an investment falls through; he has to start over with no money.

Adults drink fairly frequently at bars and parties. Several scenes feature drugs, including a party where people do cocaine. A father likes to smoke pot at night after his young child goes to sleep. An adult makes a questionable decision about drinking while she's with a high school student.