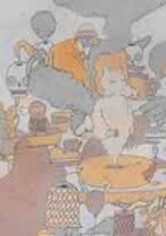 2006 NR 0h 45m DVD
The twisted minds at Cartoon Network's Adult Swim teamed with the folks at indie record label Stones Throw to put together this compilation of animated videos and a live hip-hop concert filmed in 2006. Tracks include "Monkey Suite" by Madvillain," "Take It Back" by Madlib, "None in Mind" by Koushik, "Do a Couple of Things" by James Pants, "Clap Your Hands" by Guilty Simpson and "All I Know" by M.E.D.