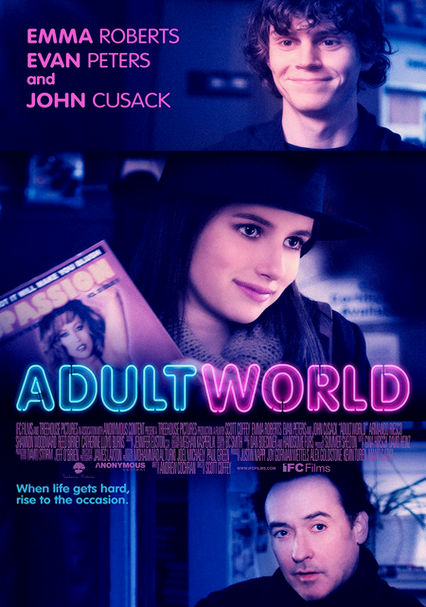 2014 R 1h 33m DVD
Recent college graduate Amy is sure she's going to be a famous poet. But until then, she takes a job at an adult book and video store to make ends meet. Meanwhile, she stalks reclusive punk poet Rat Billings in an effort to make him her mentor.

Parents need to know that while Adult World is indeed set in an adult DVD store, there's not much actual sex in the movie. Yes, there are a few bawdy discussions about the various types of videos available at the shop and plenty of sex toys visible in the background, but the film focuses on a (fairly) recent college grad with no means to support herself (besides her parents) who needs a job until her dream of becoming a paid, published, famous poet comes true. There are a few scenes that show people getting pretty drunk or smoking pot, and occasional swearing (mostly "s--t" with one well-timed "f--k").

Surprisingly tame for a film set in an adult video store. A girl is shown in her bra while kissing a boy, and later a couple is shown kissing and then later seen in relaxing in bed after sex. The scenes at the store show numerous sex toys in the background, and there's some discussion about the various genres of DVD that are sold. A drunk girl propositions a guy, who turns her down.

Some bickering between friends, and in one heated argument, a girl throws books and other objects across the room and then destroys a guitar. A girl watches her car get stolen and is later unable to stop someone from shoplifting from her store. She also tries to put her head in an oven and a bag over a her head in an attempt to channel a suicidal, edgier poet.

Some occasional swearing, including numerous variations of "s--t," "ass," "bitch" and one well-timed "f--k."

It's important to follow your dreams, but as Amy learns, the real world can be tough on dreams. Despite some very discouraging setbacks, she finds a way to temper her initial expectations while still seeking fame as a young poet.

Some characters smoke cigarettes, and later indulge in "medical marijuana" in a non-clinical setting. A young woman gets very drunk, chugging whiskey straight from the bottle.