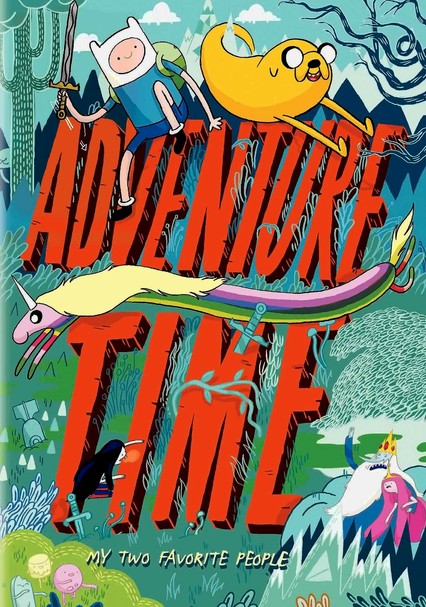 2010 TV-PG 2h 17m DVD
Finn is a 12-year-old boy who counts on the companionship of his buddy Jake, a dog with magical powers. Together the thrill-seeking duo seeks adventure in the surreal land of Ooo, meeting all manner of crazy creatures along the way. A typical day for the pair may include rescuing princesses and people in need, battling monsters or delving into dungeons. Jeremy Shada and John Di Maggio are among the voice actors for this animated series.

Parents need to know that Adventure Time contains some mild weapon use and gateway language (like "sucks" and "friggin'") and so is not appropriate for very young kids. The show is rooted in fantasy and absurdity, which is fun for older kids and tweens who can get the references and irony and separate it from reality. Youngsters, however, might be confused and get iffy messages from Finn's unlikely carefree lifestyle. Cartoon-style violence (flame guns, swords, etc.) is common throughout the show, but generally aimed at creatures like zombies, rather than living beings.

Occasional very mild innuendo. A cupcake is asked to take his wrapper off during a game of Truth or Dare, for instance. A group of partygoers play Seven Minutes in Heaven.

Finn and Jake use an array of weapons in their adventures -- including flame throwers, swords, and sticks -- though they don't usually use them against other people. In one episode, they stab and sever undead candy characters, who ooze green goo from their wounds.

Though it's clearly intended to be a fantasy, the show promotes an unrealistic view of responsible behavior, as the main characters answer to no one but themselves and their only ambition is for outlandish adventures. However, friendship is a theme that recurs in most episodes, and the show has a sweetness and heart that belies its goofball reputation. Note: Potty humor (vomiting, references to "explosive diarrhea," and the like) is a frequent source of humor.