Adventures of the Penguin King 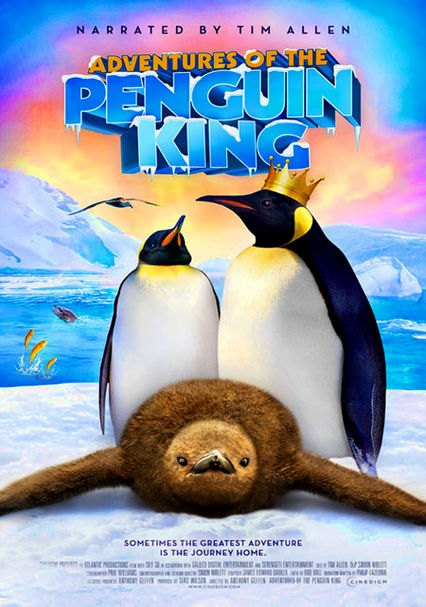 Adventures of the Penguin King

2013 PG 1h 18m DVD
Tim Allen narrates this wildlife documentary as a king penguin returns to his island birthplace, home to 6 million penguins. The bird's quest to fit in, mate and simply survive is as dramatic as any human reality show.

Parents need to know that Penguins 3D is a documentary that educates audiences not about those trendy Emperor penguins, but the second-largest species, the King penguins of the sub-Antarctic. David Attenborough narrates the story of South Georgia Island's "Penguin City," where tens of thousands of mature King penguins descend each year to mate and raise baby chicks. As have the main "characters" in March of the Penguins and other comparable animal documentaries, the King penguins face staggering odds of survival -- from the elements, as well as predators like leopard seals, Skua birds, and killer whales. An egg is broken and a male adult killed, but otherwise Penguins 3D is fine for even little penguin lovers.

Some discussion of mating practices.

Some predator danger; an adult male is killed and an egg broken.

Like many nature documentaries, the film is a positive nonfiction account of how animals overcome astounding odds to procreate and thrive under harsh conditions.