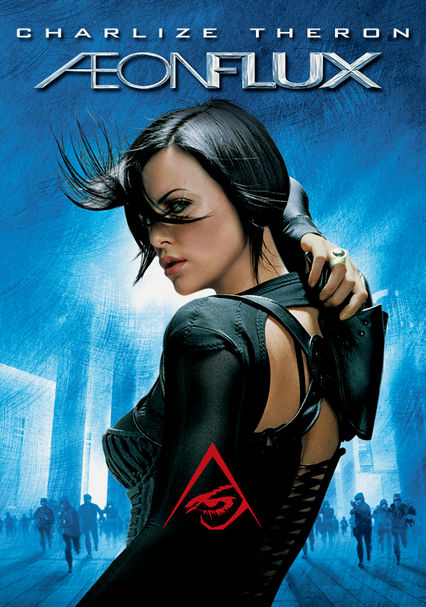 2005 PG-13 1h 32m DVD
Aiming to hasten an uprising, the leader of an underground rebellion (Frances McDormand) dispatches acrobatic assassin Aeon Flux (Charlize Theron) to eliminate the government's top leader in this futuristic thriller based on the popular animated MTV show. It's the 25th century, and a rampaging virus has forced the remnants of humanity into seclusion. But political conflict swirls within, and the climate is ripe for revolution.

Parents need to know that the film, as it follows an assassin on her mission, includes violent, bloody scenes, in particular, repeated martial arts fights (with sounds of bones breaking), stabbings and shootings (with automatic weapons as well as sniper-style guns), a woman's murder by government agents (she opens the door, expecting someone else, and the film cuts from her surprised face to the next scene), explosions (of buildings and a floating blimp-like lab), and several on-screen deaths of recognizable characters (villains and seeming heroes). Characters wear form-fitting futuristic clothing, some resembling bondage gear (one character makes a brief, joking reference to bondage as sexual practice, a great reduction from the source anime). Aeon appears nude, rising from bed, her back to the camera, a couple kisses then has (implied) sex. Music is loud and pounding during chase and fight scenes. The film also includes some semi-complex conversations concerning the ethics of cloning humans.

Shootings, fights, explosions, stabbings: Aeon is an assassin and her enemies range from sleek and athletic to thuggish.

Aeon learns to trust her instincts rather than her orders; the evil governing system is toppled.