Aerosmith: The Making of Pump 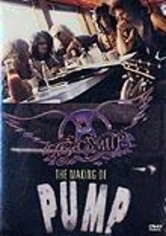 Aerosmith: The Making of Pump

1990 NR 1h 50m DVD
Go backstage for an uncensored look at the tumultuous six-month period leading up to the release of Aerosmith's multiplatinum album "Pump," and hear the album's hit songs while they were still in their formative stages. Footage of recording sessions, songwriting brainstorms and frank discussions about the band's hard-living past capture the group's ups and downs as they crank out the album that ushered them into the 1990s.