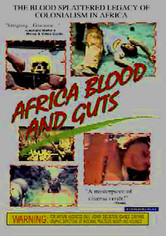 2004 NR 1h 20m DVD
This harrowing shockumentary from the directors of Mondo Cane boasts a three-year collection of unspeakable violence and horrific acts captured on film in the midst of the bloody social upheaval of 1960s Africa. Covering the Congo civil war, the Bahuti slaughter of the Rwandan Watusi, the Angola and Zanzibar revolutions and more, filmmakers Gualtiero Jacopetti and Franco Prosperi deliver a film that is not for the faint of heart.