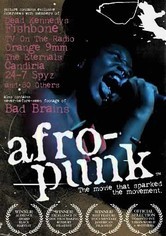 2006 NR 1h 6m DVD
Following four devout punk-rock fans who happen to be black, director James Spooner's thought-provoking documentary asks whether "Afro" and "punk" can go together. (Meanwhile, during interviews with black punkers -- including members of Fishbone, the Dead Kennedys, Candiria, Orange 9mm and TV on the Radio -- they resoundingly answer "Yes.") Bad Brains, Tamar Kali, Cipher and Ten Grand are among the featured performers.