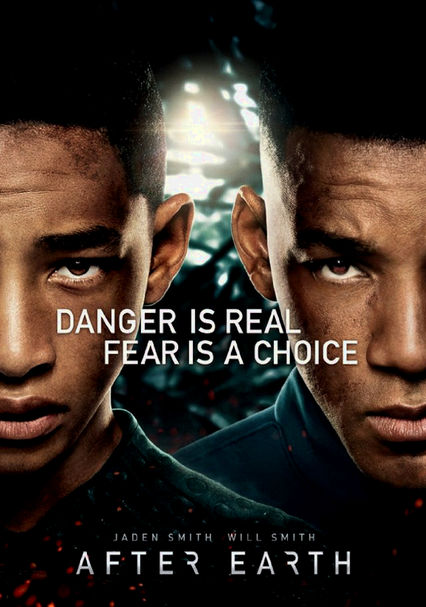 2013 PG-13 1h 40m Blu-ray / DVD
A thousand years in the future, Gen. Cypher Raige and his young son, Kitai, crash-land their crippled ship on the long-abandoned, desolate Earth. With his father near death, Kitai sets out to find a beacon that will save them from certain doom.

Parents need to know that After Earth -- which stars Will Smith and his son Jaden and was directed by M. Night Shyamalan -- is a scary monster movie with a few dead bodies and some blood. The alien monster is grotesque, overpowering, and able to trick humans into feeling fear, and viewers see a few of his human victims impaled on tree branches. No main characters die, but a majestic eagle who saves a boy's life sacrifices its own to do so, and viewers see animal carcasses. Punctuating the exciting and violent sci-fi action are laughs and scenes of strong family warmth and bonding, strong role models, and positive life lessons learned.

Flashback kisses and affection between husband and wife.

Constant peril. Some gross scenes with blood, as when Cypher must operate on his own leg. Kitai sees some crushed baby eagles that he wasn't able to save. Human victims of the alien monster are shown impaled on tree branches. Most of the violence depicted on screen appears in shadow or silhouette, and blood is mostly after the fact. A few moments when something scary pops out unexpectedly. The backstory involves a boy witnessing his sister being killed by an animal.

Cypher says "damn" once, there's one "oh God" (as an exclamation), and there's one reference to something that "sucks."

Kitai's journey teaches him that only by facing your fears can you realize your full potential. His father teaches that although danger may be real, fear is just a state of mind. A cautionary tale about taking care of our planet (destroyed by years of pollution and war) is mitigated by the eye-catching new planet of 1,000 years in the future.

Cypher almost takes pain killers that would make him drowsy (entirely understandable given his severely broken legs and little hope of rescue) but decides against it.