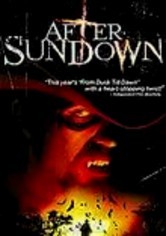 2006 R 1h 28m DVD
The exhumation of a century-old corpse accidentally reawakens a vampire straight out of the Old West in this blood-spattered horror flick set in a windswept Texas hamlet. Before you can say "undead," the vengeful creature (played by J. Christopher) and his legion of flesh-craving zombie slaves unleash holy hell on the town's denizens. Susana Gibb, Jake Billingsley, Reece Rios and Natalie Jones head the cast.