Against All Odds: Israel Survives: The Movie 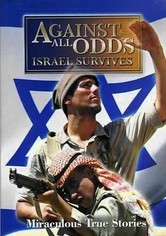 Against All Odds: Israel Survives: The Movie

2006 NR 1h 35m DVD
A condensed version of the 13-part TV series, this feature-length film explores the role of fate, faith and miracles in the short but tumultuous history of the state of Israel. Moving eyewitness accounts, gripping dramatizations and in-depth interviews with historians and religious leaders provide a portrait of a nation that's endured hostile prophecies, threats and attack, yet is sustained by the will of its people -- and the might of its army.