Against Me: We're Never Going Home 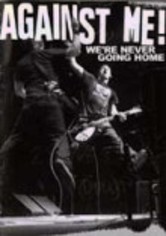 Against Me: We're Never Going Home

2004 NR 1h 1m DVD
In 2004, Against Me hired a friend (who happened to be a talented documentarian) to chronicle the group on the road. Along with capturing their intense live show, this video delves into the lives of the band. It's all here: the songs, boozing, cavorting and wooing by major record labels. Tracks include "Cliché Guevara," "Walking Is Still Honest," "Problems" and more. Also features a drinking game and a tour of the Fat Wreck Chords office.