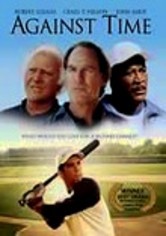 2001 NR 1h 35m DVD
Small-town athlete and scholar Z.T. (Ean Mering) dreams of a prosperous career as an inventor. But those plans change with the arrival of Zack (Robert Loggia), a 67-year-old drunk who claims to be Z.T.'s older self, sent from the future to warn Z.T. about a tragic turn of events. The film, winner of the Best Drama prize at the International Family Film Festival, also stars Craig T. Nelson as Z.T.'s widowed father and John Amos as Coach Zeller.