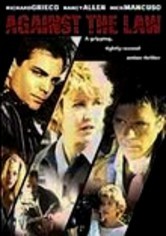 1997 NR 1h 30m DVD
Fame-obsessed outlaw Rex (Richard Grieco) goes on a cop-killing spree to prove he's the fastest gunslinger in the West and to become a public celebrity. When L.A. police officer John Shepard (Nick Mancuso) is thrust into the spotlight after killing a powerful drug dealer, Rex sets out to challenge the top cop and prove his superiority. This updated take on the Western genre features explosive action sequences and tense shoot-outs.