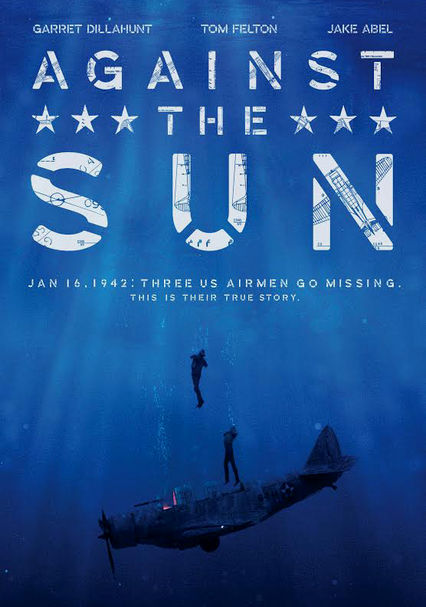 2015 PG 1h 39m DVD
After their torpedo bomber crashes into the ocean during a World War II scouting mission, three crewmen end up in a life raft without food or water -- and sharks closing in. With safety 1,000 miles away, they must keep their wits intact to survive.

Action & AdventureAdventuresMilitary & War DramasDramas Based on the Book

Parents need to know that Against the Sun is based on a true story about three American soldiers who survive a plane crash into the Pacific Ocean and are stranded on a life raft. Though not as agonizing as the similar Unbroken, the material is fairly intense. There's some arguing and shouting, some bloody cuts, and a gun fired. An albatross is shot and a shark is sliced open, with guts spilling into the raft. We hear talk of death and a mention of suicide. We see a scary drowning nightmare, a plane crash into the ocean, and a huge storm. Language includes two uses of "s--t" and infrequent uses of "damn" and "hell." Sex is not an issue, but a man describes his sister to another man, as if thinking of setting them up. The main issue here is that Harry Potter fans might be interested in seeing "Draco Malfoy" (Tom Felton) playing an American character, and a good guy. Fortunately, the movie is mainly quite hopeful and not too intense for kids of 11-12 and up.

A man describes his sister to another man, with the intention of "fixing them up." Fantasy sequences of what the sister might look like. Men are shown shirtless.

General tension and peril. Some bloody wounds. A gun is shown and fired. Albatross shooting. Shark wrestling. Gory shark guts. Intense feelings of desperation and being trapped. Some shouting and verbal conflict. Plane crash into the ocean. Storm at sea. Somewhat scary dream sequences, such as drowning. Talk of death. Reference to suicide.

Themes include learning to work together and keeping a positive attitude. Characters help each other and forgive one another's mistakes.