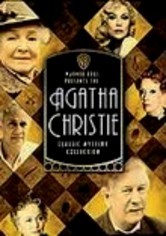 1981 NR 1h 34m DVD
While on a train to London, American tourist Luke Williams (Bill Bixby) meets the seemingly unhinged Lavinia Fullerton (Helen Hayes), who says she has proof of a string of murders. When she's killed shortly after their arrival, Luke takes it upon himself to investigate. Unfortunately, his good intentions backfire, and he ends up as a suspect. Lesley-Anne Down and Olivia de Havilland also star in this TV adaptation of Agatha Christie's novel.