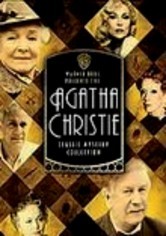 1988 NR 1h 35m DVD
Adventurous American tourist Anne Beddingfield (Stephanie Zimbalist) is drawn into a world of diamond thieves that leads her aboard a luxury liner and puts her in a killer's crosshairs in this engaging made-for-TV movie. Exotic locations, an intriguing murder mystery and a star-studded cast of suspects make the film a must-see for Agatha Christie buffs. Zimbalist's shipmates include Edward Woodward, Rue McClanahan, Tony Randall and Ken Howard.