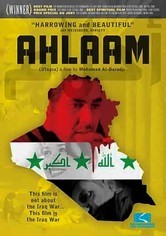 2005 NR 1h 50m DVD
The disparate lives of shell-shocked soldier Ali (Bashiral-Majid), medical student Mehdi (Mohammed Hashim) and bride Ahlaam (Aseel Adel) -- whose fiancé was kidnapped by Saddam Hussein's forces on their wedding day -- converge in a psychiatric hospital. But when the hospital is destroyed by American bombs, Ali volunteers to try to round up some of the escaped patients. The cast and crew faced a harrowing experience filming in war-torn Bagdad.