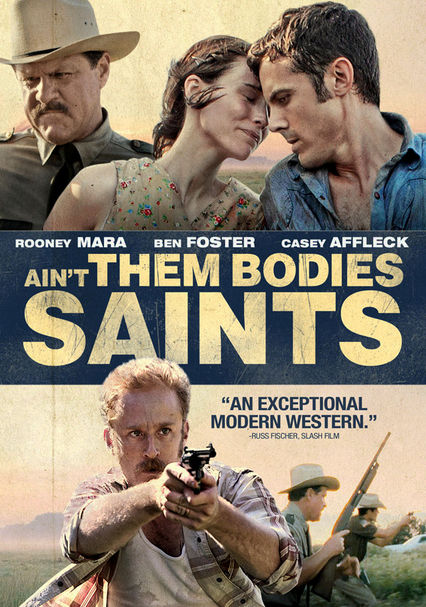 2013 R 1h 45m Blu-ray / DVD
After escaping prison, Bob Muldoon begins a search for his girlfriend and young daughter, but their reunion doesn't go as planned: He took the rap for a crime she committed, but now she's involved with a lawman from their past.

Parents need to know that Ain't Them Bodies Saints is a stylized, atmospheric indie drama that's part Western, part relationship drama. Chronicling the intense romance between an outlaw and his bride, the movie has been compared to both Bonnie and Clyde and Badlands, and you can expect a fair amount of gun violence and on-screen death. There's also some language ("s--t," "a--hole"), but this is ultimately a love story, so there's a romantic undercurrent to the plot -- and some flashbacks to the passion between the central characters (no actual sex scenes, though). Because of the mood and the adult themes, this is a drama best reserved for mature teens.

Flashback to kisses and caresses between Bob and Ruth. Their relationship is clearly passionate, but there are no actual sex scenes in the film.

Gun violence bookends the film; there's a shoot-out at the beginning and one toward the end. Characters are injured or die from their gunshot wounds.

Despite the fact that it's about outlaws, the movie holds unconditional love on a pedestal and speaks of forgiveness and the enduring bonds of marriage and family.