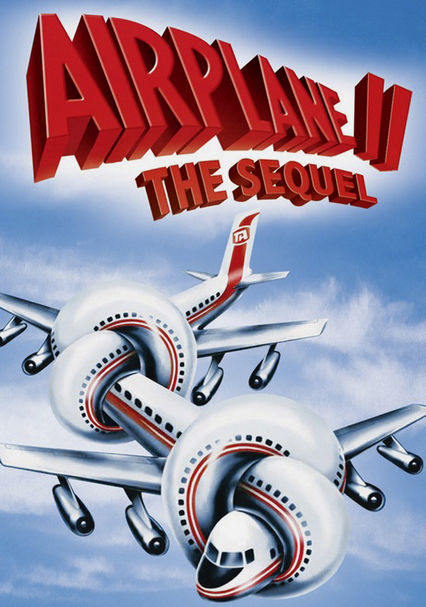 1982 PG 1h 24m DVD
In this sequel to the wildly popular farce Airplane!, pilot Ted Striker (Robert Hays) knows that the first commercial spaceflight to the moon is headed for disaster. Fighting his fears, he races to save the passengers and win back his ex-girlfriend (Julie Hagerty). Lloyd Bridges reprises his role as the chain-smoking, amphetamine-popping, glue-sniffing airport controller, while William Shatner, Raymond Burr and Sonny Bono are among those on board.

Parents need to know that Airplane II: The Sequel is the 1982 second installment from the classic parodies of 1970s airline disaster films. Although it's still laugh-out-loud hilarious, there are plenty of jokes revolving around sexual innuendo -- as well as jokes involving a priest who reads Altar Boy magazine and attempts to have oral sex with the person sitting next to him -- that make this film a better choice for mature viewers. Nothing is sacred here, and there are plenty of jokes involving sex and drugs. Comedic violence is frequent. Bare breasts are on display. Frequent profanity includes "bulls--t" and "a---hole. Also, there's frequent smoking, especially in the air traffic control room. Don't let the PG rating fool you; if released today, the movie most likely would be rated PG-13.

Frequent sexual innuendo throughout the movie. Naked breasts shown as women pass through a metal detector in an airport. During the very beginning, the movie does a Star Wars parody of the set-up scrolling off into space that segues into the beginning of a description of two people about to have sex. A priest is shown reading a magazine called Altar Boy, and turns it sideways, presumably to look at the centerfold. This priest is later shown attempting to engage in oral sex with the person sitting next to him. At an airport help desk, a woman asks, "Should I fake my orgasms?" A computer is shown smiling after a female flight attendant is told that she's going to have to "blow the computer." During a discussion on television, a hearing-impaired translator makes a gesture known for signifying masturbation.

Comedic violence throughout the movie. During a long-winded story told in a mental hospital, a group of patients is shown putting guns to their heads and heard, off-camera, shooting the guns. A man punches a woman in the face after hearing another man yell the last name "Striker!" A space shuttle is shown crashing into a space station. A man is shown trying to shave while the space shuttle crashes, causing the man to cut his face and bleed. A boy asks his father about his rape trial while they're waiting to take off from Earth.

As both a very silly comedy and a parody of airplane disaster movies of the 1970s, there isn't much in the way of positive messages.