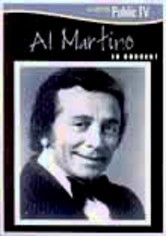 2004 NR 1h 0m DVD
The silky-smooth sounds of Al Martino fall under the spotlight in this specially recorded concert. Martino's story is one of rags to riches; he began life as a bricklayer in his father's construction business before gaining fame and selling millions of records. Recorded in the 1970s, this show features Al at the top of his game. Among the songs performed are "Volare," "Speak Softly Love," "Spanish Eyes," "Here in My Heart" and many others.