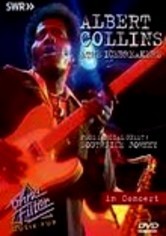 1985 NR 1h 0m DVD
Blues guitarist Albert Collins was known as "the Iceman" and "Master of the Telecaster" for his unique sound on the Fender guitar. With his group the Icebreakers, Collins welcomes special guest Southside Johnny and heats up the stage in this 1985 performance for Germany's "Ohne Filter" series. Featured are live renditions of "Listen Here," "If Trouble Was Money," "Skatin'," "The Highway Is Like a Woman," "That Thing I Used to Do" and more.