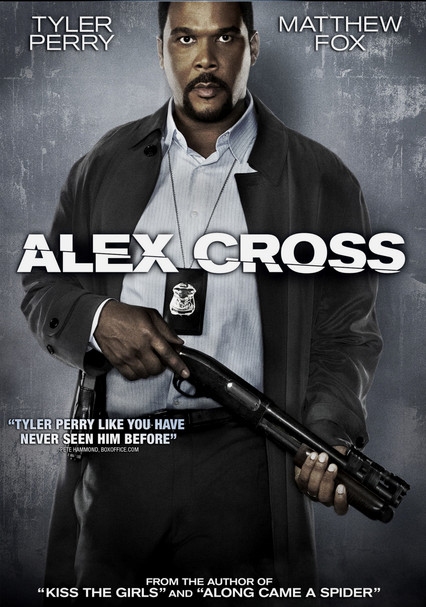 2012 PG-13 1h 41m Blu-ray / DVD
Detective/psychologist Alex Cross faces off against a disturbing serial killer in this exciting action thriller based on James Patterson's best-selling novels. As the stakes keep getting higher, Cross finds himself facing his own moral boundaries.

Parents need to know that Alex Cross is a quasi-prequel to the other James Patterson-based dramas featuring a much-older Cross (played by Morgan Freeman in Along Came a Spider and Kiss the Girls). The younger version of Cross (played by Tyler Perry) is even more willing to chase criminals and do what's necessary to stop them -- and that doesn't necessarily mean getting them behind bars. The violence isn't as extreme as, say, a Quentin Tarantino movie, but it's probably equivalent to one of the newer Bond films. In other words, it's not just shootouts, but also scenes of torture, a decapitated head, and a pregnant woman killed for pleasure by a villain who takes joy in inflicting pain. Even iffier? In the end, the movie's message seems to be that even officers of the law sometimes need to take a morally questionable path toward justice. Also expect some language ("s--t," etc.), a scene with a lingerie-clad woman, and lots of GM vehicles.

One sex scene turns to violence: A woman wearing nothing but lingerie asks a man she's been flirting with (and thinks she's going to sleep with) to bind her arms -- but her anticipation turns to horror when he injects her with a drug. Another brief sex scene. A married couple kisses and cuddles a few times.

The killer in this movie isn't just a paid hit man, he's a psychopath who relishes inflicting pain. Some people he just shoots and kills instantly (with sniper precision), and others he tortures (viewers see him cut off a sedated and bound woman's finger and later find out he cut them all off, after hearing the sounds of it happening). He also kills his target's wife just for fun and takes a photo of a decapitated woman's head that he then texts to her friend. There are several scenes of hand-to-hand combat, a couple of shootouts, a deadly fall onto a car, explosions that cause collateral damage, and an amateur MMA competition that leaves the loser incapacitated due to the winner's desire to cause serious pain.

The story's message is that sometimes vengeance is better than waiting for the law to provide justice.

A made-up drug is a central plot point. It sedates and paralyzes people but leaves them aware of their surroundings. The killer drugs some of his victims so he can torture them. A rich businessman offers Alex Louis XIII cognac that costs thousands of dollars. He declines, but the millionaire drinks it. Adults at a restaurant have drinks.