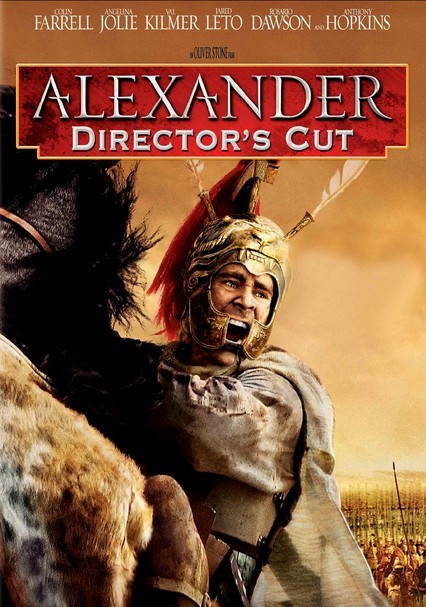 2004 R 2h 47m DVD
Oliver Stone re-creates the towering, true story of Alexander the Great, who, in the 4th Century BC, conquered Greece, Persia, Afghanistan and India -- 90% of the "Known World." Against massive armies of chariots and elephants, he never lost a battle! Visionary, explorer, dreamer -- he was also a tender son, torn by his mother's burning love and ambition and desperate for his father's approval.

Parents need to know that this movie has extreme and explicit battle violence with many impalings and other graphic injuries. Alexander is portrayed as bi-sexual. There are very explicit heterosexual sexual situations and references and male and female nudity, plus references and implications of gay sex and some same-sex kissing and a mother-son kiss on the mouth and an attempted rape. Some exotic dancers perform in skimpy attire. Characters drink, sometimes to excess.

Intense and graphic battle violence, many deaths, lots of blood.

A lot of drinking, characters get drunk.