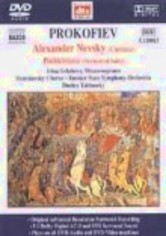 2003 NR 1h 3m DVD
Celebrated Russian mezzo-soprano Irina Gelahova turns in an acclaimed performance in this production of Sergei Prokofiev's haunting cantata, performed by Russian State Symphony Orchestra under the baton of Dmitry Yablonsky. Inspired by the Teutonic invasion of Russia in the 13th century, Prokofiev's piece was originally conceived as the soundtrack to legendary Russian filmmaker Sergei Eisenstein's film of the same name.