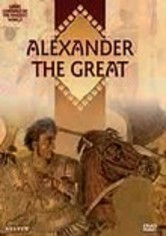 2000 NR 0h 50m DVD
This thought-provoking documentary delivers the facts about Alexander the Great via dramatic reenactments, authentic location footage and commentary from credible experts. Also known as the king of Macedon, Alexander was widely recognized as an ingenious military strategist who racked up a string of memorable victories at Thebes, Granicus and Issus, leaving most of the known world conquered in his wake.