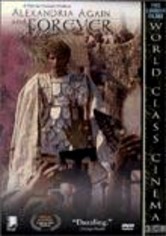 1990 NR 1h 45m DVD
After triumphing at the Berlin Film Festival, director Yehia Mourad (Youssef Chahine) joins a hunger strike. There, he wallows in his obsession for Amr (Amr Abdel Guelil), the young actor whose career he launched. But his infatuation changes focus when he meets the beautiful actress-turned-revolutionary Nadia (Yousra) in the third segment of director Youssef Chahine's autobiographical Alexandria trilogy.