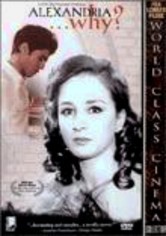 1978 NR 2h 13m DVD
Living in Egypt during the chaos of World War II, teenager Yehia (Mohsen Mohiedine) often escapes into the glamour of movies, dreaming of telling his own stories in Hollywood. But as he falls in love with a local girl and learns more about the Nazi atrocities occurring across Europe, Yehia finds it increasingly difficult to hide. This first film in Youssef Chahine's "Alexandria" trilogy follows numerous characters in intertwined stories.