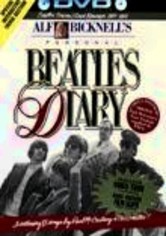 1996 NR DVD
Alf Bicknell, the Beatles' chauffer from 1964 to 1966, reminisces about his experiences driving the Fab Four to and from concerts, airports and hotels, in this blend of documentary and personal memoir. Film footage includes the Beatles' first U.S. appearance at New York's Shea Stadium, a trip to Hollywood and a solo concert by Paul McCartney. Mr. Bicknell also recants his memory of the Fab Four meeting The King of Rock and Roll, Elvis Presley.