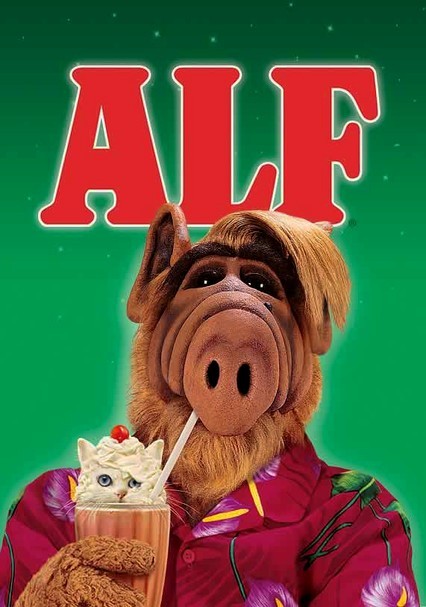 1986 TV-G 3 seasons
In this hit sci-fi sitcom, an intergalactic refugee nicknamed ALF (Alien Life Form) crash-lands his spacecraft into the home of Willie Tanner (Max Wright) and his family, who adopt the furry ET (voiced by Paul Fusco) and hide him from busybody neighbors and gung-ho military types. Though he misses his home planet, acerbic ALF finds consolation in feeding his insatiable appetite, chasing cats and indulging one harebrained scheme after another.

ALF ("alien life form") aptly describes Gordon Shumway, the last known survivor of the planet Melmac. Gordon crashes his spacecraft into the garage of the Tanner family's suburban home and is subsequently adopted by them. In this first season, ALF works as a phone salesman for a cosmetics company, has a date with a blind woman, buys the family a Ferrari after selling his spaceship for parts and develops amnesia after a blow to the head.

In the second season of this popular 1980s sitcom, the Hawaiian shirt-loving Alf (short for Alien Life Form) is still living it up with the Tanner family, craving stray cats and longing for his days on his home planet, Melmac. But for Willie (Max Wright), Kate (Anne Shedeen), Lynn (Andrea Elson) and Brian (Benji Gregory), hiding their extraterrestrial houseguest hasn't gotten any easier. That's why he sleeps in the garage.

Continuing his extraterrestrial high jinks from the comfort of planet Earth, Alf (that's short for "alien life form") is becoming a bona fide member of the Tanner family in the third season of the classic 1980s sitcom. In Season 3, Willie (Max Wright) has a nightmare that Alf (voiced by Paul Fusco) was his college roommate, Alf suspects Elvis is living next door, and Kate (Anne Schedeen) discovers she's pregnant.

Parents need to know that though ALF features a puppet, it's not really meant to be a little kids' show. Children may enjoy the show, particularly since much of the broad humor will appeal to them, but ALF himself is sarcastic, insulting, and crass. There's a lot of toilet humor, and a fair amount of ALF mocking authority figures. ALF is additionally in danger of being discovered and studied/dissected by the military, but the tension is quite light and won't distress any but the most sensitive viewers. Parents' main worry will be ALF's rude mouth. He doesn't understand human ways, and he finds an awful lot of the things we do to be stupid. Maybe so, and maybe that's funny to children who themselves are learning society's rules, but parents might not appreciate their kids imitating ALF's attitude. Nonetheless, ALF has aged pretty well and is still worth watching, particularly by kids who have a sci-fi bent, or by families who are hoping ALF can be a gateway show to help children develop an appreciation for sci-fi and fantasy.

ALF is under constant threat of discovery by threatening military figures but the danger is played for laughs. ALF also often threatens to eat the Tanner family's pet cat, but it's never seriously menacing.

No cursing, but ALF can be a bit sarcastic and free with words like "stupid" or "idiot."

ALF's many foibles are generally the focus and he learns lessons such as humility and loyalty by making mistakes and getting comeuppance.

ALF had a spinoff cartoon series that kids may want to watch if they like this show.

ALF has a fondness for beer, and in at least one episode, he cracks open a cold one with the Tanner family's 6-year-old son before Mrs. Tanner stops him.