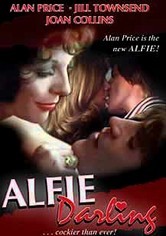 1975 NR 1h 38m DVD
In this 1975 sequel to the hit Alfie, our womanizing hero (Alan Price) now works as a truck driver and finally meets his match in the form of a sophisticated magazine editor named Abby (Jill Townsend). She's out of his league, and he's out of his element when she turns out to be as romantically ruthless as he is. The comic drama also features a thoroughly sexy Joan Collins as one of Alfie's conquests.