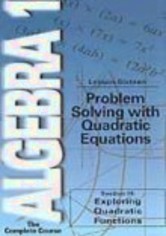 2000 NR 0h 30m DVD
Dr. Monica Neagoy presents three problems involving quadratic equations: the first is a concrete sequence of geometric figures, the second an introduction to the Golden Ratio, and the third an exercise in finding the roots of a quadratic equation. Real-world applications of algebraic principles make this a fresh departure from conventional educational methods. Also covered is the difference between quadratic functions and quadratic equations.