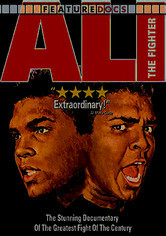 1975 G 1h 33m DVD
Director William Greaves's compelling documentary about boxer Muhammad Ali chronicles the champ's 1971 bout against Joe Frazier. Greaves goes behind the scenes of the event, capturing footage of the training, press conferences, negotiations and celebrity attendees as well as graphic film of the "fight of the century." Part biography, the movie also details Ali's earlier days in Louisville, Ky., when he was known as Cassius Clay.