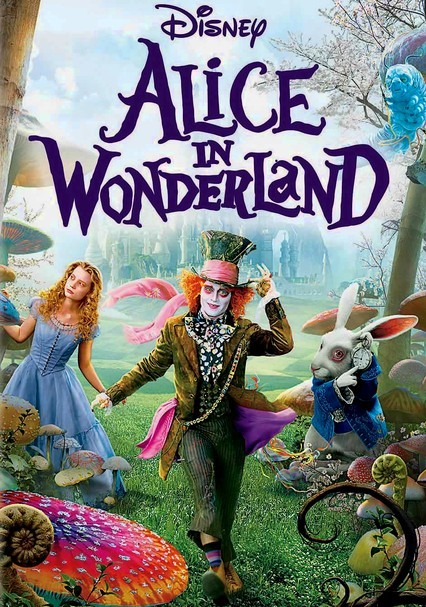 2010 PG 1h 48m Blu-ray / DVD
Years after her first visit to Underland, 19-year-old Alice returns to confront the sadistic Red Queen in this inventive adaptation of Lewis Carroll's novels. It's up to Alice to slay the Jabberwocky that's been terrorizing Underland's peculiar folk.

Parents need to know that Tim Burton's Alice in Wonderland might be rated PG, but it's pretty intense and scary at times for younger kids, especially because it's in 3-D. This trippy adaptation -- in which Alice is a young adult -- includes some fantasy violence with scary monsters that attack people, a cruel Red Queen (Helena Bonham Carter) who frequently sentences people to death, and a climactic battle scene between sword-brandishing humans, animals, and beasts. Some parents might want to know that a caterpillar (played by Alan Rickman) smokes a hookah, but this is as Lewis Carroll depicted the character. The language includes taunting insults like "stupid," "imbecile," "idiot," "bloody," and the like, and the sexuality is limited to one kiss between a married man and another woman and some aggressive flirting.

Alice catches her brother-in-law kissing a woman who's not his wife; Alice and Hamish dance, and he proposes to her. The Knave of Hearts pushes an overgrown Alice against a wall and says he likes her, because he likes "largeness." The Red Queen acts smitten with the Knave of Hearts.

The Red Queen is quite bloodthirsty and frequently sentences people to death, yelling "Off with their heads!" She makes comments like "I love morning execution, don't you?" and sends scary creatures to do her bidding. A scary dog-like creature called the Bandersnatch suddenly attacks, chasing and pouncing on the Tweedle twins. Since these sequences are in 3-D, they're especially intense. There's a moat filled with cut-off heads and potions filled with severed fingers. People are scratched and nearly killed, an executioner is shown about to lower the axe on someone, and in the end, a creature is decaptitated.

The Red Queen's cruelty, jealousy, and insecurity end up costing her everything, proving that she's wrong when she asserts that it's "better to be feared than to be loved." Alice and her Underland friends are all loyal to each other and to the cause of overthrowing the evil Red Queen -- all are willing to make sacrifices to ensure that the Red Queen is defeated. Alice confirms the belief that to dream, to believe in the impossible, to believe in your own abilities and potential, is actually a very wise thing to do.

Absalom the smoking caterpillar does just that -- smoke a hookah -- in three different scenes. The Red Queen and her court seem to drink something that looks like wine at a meal.