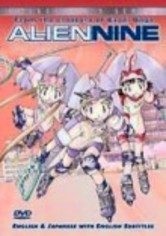 2003 NR 1h 40m DVD
Chosen by her 6th-grade class as the top "alien fighter," Yuri is charged with eliminating the extraterrestrials that are constantly attacking her school, using her symbiotic alien borg helmet. With a job like that, who has time for recess? Based on the popular manga by Hitoshi Tomizawa, this anime series follows a reluctant Yuri and her two pals as they square off against the alien invaders and try to save their school from peril.