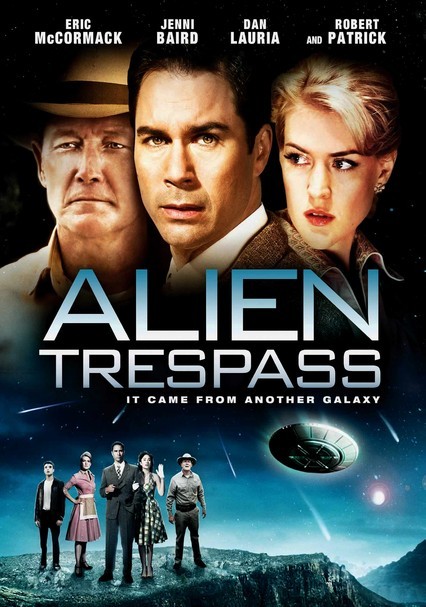 2009 PG 1h 30m Blu-ray / DVD
This homage to 1950s-era alien invasion flicks stars Eric McCormack as Ted Lewis, an astronomer whose body plays host to an intergalactic bounty hunter named Urp after a spacecraft crashes into a mountain. But Urp isn't the only survivor: A ravenous monster is now roaming the California countryside. With the help of a local waitress (Jenni Baird), it's up to Ted -- or rather, his alien alter ego, Urp -- to save the planet from total annihilation.

Parents need to know that this spoof was made as a loving tribute to '50s B-movie sci-fi -- and, as such, has the same squeaky-clean feel and mild peril of those films. There's some sci-fi violence, but since it's being perpetrated by a guy in a rubber suit, it's hard to be too alarmed when men, women, and children are dissolved into goo. Expect a fair amount of pipe smoking (accurate for the era) and some kissing and ogling.

Some kissing; some flirty talk between a husband and wife while she's wearing a nighdress. Teens make out but stop to talk about "going all the way"; their dalliance is interrupted by a crashing spaceship. When alien lawman Urp inhabits Dr. Lewis' body, there's some confusion, as Urp is attracted to a woman who's not Dr. Lewis' wife. But it's played as chaste romantic slapstick with some smooching.

Mostly fairly stylized sci-fi violence; for example, a monster attacks with tentacles, dissolving its victims into brown, foamy goo. Some scuffling and ray gun blasts directed at monsters. A policeman shoots the hero in the shoulder.

Aside from the occasional "hell," minimal.

Recreating the style of a '50s sci-fi B movie, the film does have a gentle message about not judging those who are different -- in this case, an alien lawman -- without getting to know them. Departing from '50s standards, the main female character is resourceful rather than weak or passive.

Some mentions of brands like Coke, Rolaids, and Edsel.

Extensive pipe smoking (accurate to the period the movie is set in); a character is presented as a hard-liquor drunk.