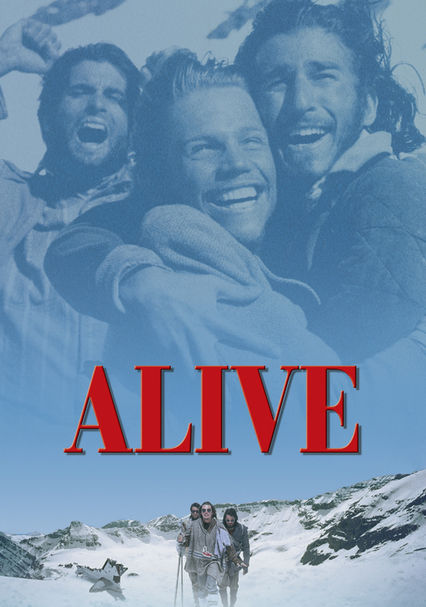 1993 R 2h 6m DVD
Ethan Hawke and Josh Hamilton star in the true story of a Uruguayan rugby team whose plane crashes in the Andes mountains. During their epic struggle to survive, the 35 athletes were stranded on a barren glacier with almost no food or supplies. Over time, as desperation and frostbite set in, the survivors were forced to feed on their dead teammates to stay alive. Eventually, three men set off on a last-ditch journey to find rescue.

Parents need to know that Alive is a 1993 movie based on the true story of a Uruguayan rugby team forced to eat the flesh of their dead companions to survive being left for dead in the Andes Mountains after a plane crash. Though cannibalism is the most notorious aspect of this story, the movie doesn't treat it in a sensationalized or exploitative manner; rather, it's made clear through their arguments that, despite obvious ethical and spiritual concerns, they have no other course of action to take to survive. The plane crash itself is graphically shown: Passengers are blown out of the plane in their seats after the plane splits in two. Injuries, death, blood, and shock are shown in many ways. Profanity includes "f--k" and "s--t." For older teens mature enough to grasp the testament to willpower, perseverance, and spirituality when placed in a horrific situation, Alive is as thoughtful as it is riveting.

A plane crash is graphically shown. Passengers are hurled from the plane after it splits in two or are found dead or gravely wounded. Peril throughout the film as characters struggle to survive the harsh climate of the Andes Mountains after a plane crash. Blood. In the most infamous scenes of this true story, starving characters are forced to eat the flesh of their dead companions; however, it's made very clear that this is the only way in which they can survive, and intense discussion and argument takes place before they take this course of action.

"F--k you." "S--t." After it's decided that the survivors of a plane crash must resort to cannibalism, one of the survivors tells the others that if he dies, they have permission to "eat me," which provokes laughter at the innuendo.

The strength of willpower and perseverance in the midst of intense life-and-death struggles. Characters find spirituality in the face of almost inconceivable hardship.