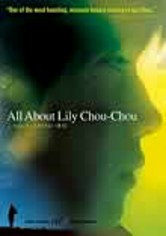 2001 UR 2h 26m DVD
In this chilling teen drama set amid the chaotic world of Japanese cyber-pop culture, Hayato Ichihara stars as Okinawan Yuichi Hasumi, an avid fan of pop star Lily Chou-Chou who becomes dangerously obsessed with his idol. Fourteen-year-old Yuichi spends substantial amounts of time on the Internet, communicating about Lily with other fans via email, Web sites and chat rooms. But before long, Yuichi's mania takes a turn for the disturbing.