All About Our House 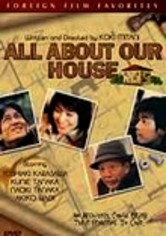 All About Our House

2001 NR 1h 55m DVD
When Naosuke and his wife, Tomiko, set out to build their dream house, they have no idea the dream will become a nightmare in this Japanese comedy. The couple wants a one-of-a-kind home, so they ask cutting-edge but unlicensed architect Mr. Yanagisawa to design it. But when Tomiko's conservative father -- who has a very different aesthetic -- gets involved, the two stubborn men go head-to-head in an all-out war over every detail of the house.