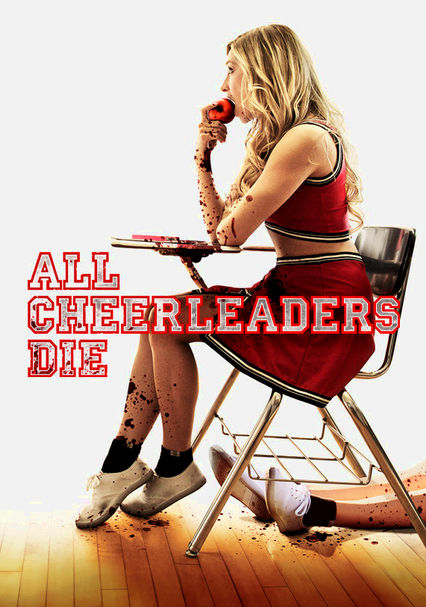 2013 NR 1h 30m DVD
To carry out a vendetta against Blackfoot High's cheerleaders and football team captain, outsider Maddy Killian infiltrates the pep squad. But when supernatural forces intervene, Maddy's plan for revenge leads to a ghoulish battle of the sexes.

Parents need to know that All Cheerleaders Die is a horror-comedy involving cheerleaders, football players, and zombies. Some have called it a satire, but that's up for debate. For a so-called comedy, the violence can be brutal and includes football players punching cheerleaders in the face, beating them up, and a suggestion of rape. There's also a good deal of killing, blood, and gore. A topless teen girl has sex with a teen boy. Two teen girls kiss and have (off screen) sex, and there's plenty of sexual innuendo and sexy situations. Language is very strong, with frequent use of "bitch," plus "f--k," "s--t," and "p---y." One teen is a pot dealer and smokes pot with other teens, both onscreen and off. Teens also drink beer and other alcohol. Teen horror hounds will no doubt be drawn to the movie with its promise of humor, gore, and sexy cheerleaders, but it's extremely iffy both in terms of quality and messages.

A teen girl removes her top (breasts shown) and has sex with a teen boy in a bathroom. Two teens kiss in the woods and prepare to have sex; later they reveal that they did have sex, though nothing is shown. The woman taunts her former boyfriend with a list of people who brought her pleasure (he's not one of them). A woman walks from one house to another wearing nothing but white panties and a bra; the camera follows close on her behind. The girls wear sexy, plastic/leather-looking cheerleader outfits. Innuendo.

Lots of brutal, gory violence. A teen football player punches and/or beats up some teen girls. One girl claims to have been raped by him. Zombies kill several men and feast on their blood (lots of fake-looking, computer-generated gore is shown). One man is bashed up against a tree, and another is stabbed. A character is caught in a bear trap. A car crash kills several characters, and blood is shown. A cheerleader is tossed in the air; her squad fails to catch her, and she falls with a crunch and dies.

Some have claimed that this movie is a satire of the way women are treated in horror films, but then it goes ahead and treats them the same way. The behavior is generally awful, and the only consequence anyone ever faces is death.

A minor teen character is a drug dealer and is shown smoking pot in his van with another character. In other scenes, he emerges from the van with friends as smoke billows out behind them. Teens drink beer and other alcohol at parties.