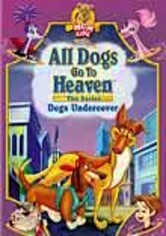 1996 NR 1h 29m DVD
Charlie (voiced by Steven Weber) and his canine friends Itchy (Dom DeLuise), Anabelle (Bebe Neuwirth) and Sasha (Sheena Easton) are up to their usual tricks in this kid-friendly collection of episodes from the popular animated series, based on the 1989 Don Bluth film. A foursome of episodes built around the theme of playing detective includes "La Doggie Vita," "Magical Misery Tour," "Fearless Fido" and "The Big Fetch."