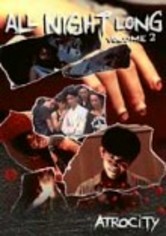 2002 NR 1h 17m DVD
Fed up with the abuse he endures from classmates, unassuming high school student Shun'ichi (Masashi Endô) unwittingly becomes a pawn in the sick and twisted games of a bloodthirsty street gang who forces him to witness unspeakable acts of violence and torment. Before long, Shun'ichi is transformed into a monster psychopath in this creepy thriller directed by Katsuya Matsumura and co-starring Ryôka Yuzuki and Masahito Takahashi.