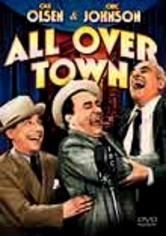 1937 NR 1h 0m DVD
Vaudeville comedians Ole Olsen and Chic Johnson star in this madcap murder mystery. The two stage a benefit show to help struggling theatre owner Joan (Mary Howard), but it could be curtains for the revue when the producer is murdered. Undeterred, the pals boldly announce they'll reveal the killer's identity in a live radio broadcast. But just seconds before airtime, they're kidnapped. Can the duo escape and get to the theatre by showtime?