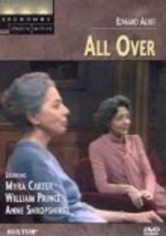 1976 NR 2h 0m DVD
As a famous man lies dying, his family -- including both his wife and his mistress -- gathers inside, while members of the media converge outside for news of his death in this filmed-for-television staging of Edward Albee's play. The ensemble cast for this Broadway Archive presentation includes Myra Carter, Hal Holbrook, Ann Lynn, Pirie MacDonald, David Petersen, William Prince, Anne Shropshire and Margaret Thompson.