All This, and Heaven Too 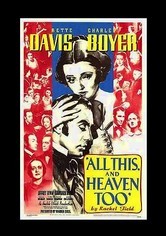 All This, and Heaven Too

1940 NR 2h 23m DVD
French governess Henriette Deluzy-Desportes (Bette Davis) is the prime suspect when the wife (Barbara O'Neil, in an Oscar-nominated performance) of the handsome Duc de Praslin (Charles Boyer) is found dead. Henriette was in love with the duke -- but would she actually kill to be with him? Based on the novel by Rachel Field, which documents a real-life scandal, this classic drama also earned Oscar nods for Best Picture and Best Cinematography.