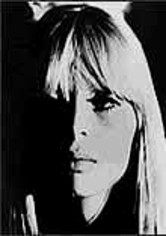 1983 NR 2h 0m DVD
After fighting a hard-core drug habit for most of her life, Christa Päffgen aka Nico -- the striking European supermodel who sat in as an occasional lead singer with the Velvet Underground -- succumbed to a tragic death in 1988 at the age of 50, the result of a bicycle accident. Resurrecting her ghostly vocals, this rare collection of footage captures two of her final public performances, filmed in the United Kingdom in the early 1980s.